Gabriel Asoka, also known by his moniker, The Mazeking (飛龍), is an American artist born and raised in Maryland, who has lived and worked in New York City since 2012, prior to that he studied, lived, and worked in Los Angeles, Chicago, Bangkok, and London. For more than two decades Asoka has been creating colorful, energetic and provocative artworks, often compared to Kandinsky and Pollock. Asoka started making art as a young child and has continued throughout his life. At age 7, he became interested in philosophy, ancient teachings and meditations, which continues to inspire & inform his works. He started college at age 15, studying history, science, and philosophy. After high school, as a way of supporting his art practice and exploring moving visual images, he started working in the motion picture industry, going on to work on over 25 films including, Mars Attacks, Flags of Our Fathers and Beautiful Daydreams. In 1998 he officially declared his career path as a painter and fine artist, and went on to produce a series of oil and acrylic paintings on canvas. In 2002, he had his first solo exhibition in Los Angeles. He utilizes various mediums in the creation of his works, including oil & acrylic paints, oil stick, organic dyes, tea dyes, bamboo, crayons, graphite, charcoal, chalk, gesso and recycled paper. In 2008, while traveling overseas he had a NDE, afterwards changing his name as an act of renewal. His primary interest is imagery itself; “My love has always been imagery; always inspired by dreams, color, and light”. Over the years, his art has been collected by private collectors from around the world. He currently lives and creates in New York City. 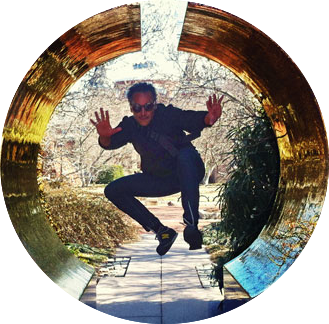